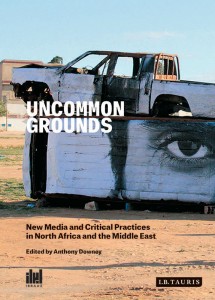 I am pleased to announce the launch of Ibraaz and I.B. Tauris book Uncommon Grounds: New Media and Critical Practices in North Africa and the Middle East, edited by Anthony Downey.

in 2013-2014 I project managed the production of the book, working with the proficient team of Ibraaz, I.B. Tauris and the Beirut-based designers, Maajoun.

Uncommon Grounds has been named by Hyperallergic – a globally renowned online forum – as the best art book of 2014.

‘…Edited by the always insightful Anthony Downey, Uncommon Grounds is a good place to start for those seeking to understand the role of new media in the region. This isn’t a conventional art book, but an exploration of new media and its impact on a land often manipulated and colonized (particularly through images) by foreign forces.’

You can buy a copy of the book from I.B. Tauris website.