I was invited by David Cotterrell and SCAN (digital and interdisciplinary arts agency) to take part in the one day symposium Art Image Politics as part of the extended programme for the exhibition David Cotterrell: Monsters of the Id (11 Feb – 31 March, 2012).

I was part of a panel with David Cotterrell, Michaela Crimmin, Roger Kneebone, Matthew Cornford, Ian Gwilt and chaired by Helen Sloan, director of SCAN.

Thanks to you for your excellent presentation on Saturday – your contribution really contributed to the success of the day and provided a real example to clarify some of the abstraction and more global approaches in the other presentations. 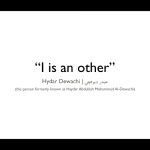 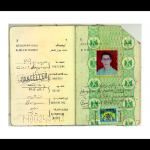 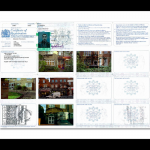 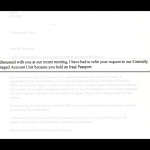 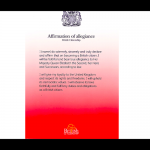 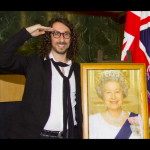 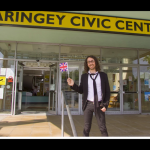 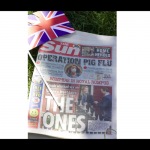 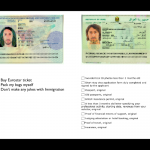 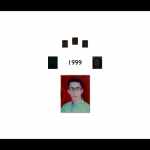 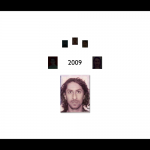 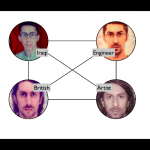 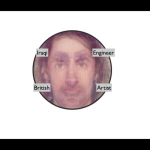 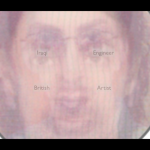 Today’s exile may be yesterday’s tourist.

In his 1984 essay “Reflections on Exile,” Edward Said questions if nationalism and exile share intrinsic attributes and asks if they are “two conflicting varieties of paranoia?” Victor Burgin elaborates in his essay “Paranoiac Space” on this comparison between what he refers to as “anecdotal expression of ‘personal feelings’ and the abstraction of political discourse”. He compares the term “paranoia” in psychoanalysis with its everyday use but draws attention to its psychoanalytic setting and explains, “there is no ‘past reality’ in the psychic reality… The past event, whether actual or fictional, produces real effects in the present.” This mirrors what Said concludes in his essay by saying that for an exile, “both the new and old environments are vivid, actual, occurring together contrapuntally.”

Even when an immigrant is eventually accepted, by the state, as a citizen, not only he/she possesses a new nationality, but also, through bureaucracy, acquires a new persona. This new persona projects itself through external recognition, mainly by the state, and eventually manifests itself as an internal image in the new citizen.

During the process of becoming a citizen, commonly referred to as “naturalisation,” there is a form of identification with an Other, similar to that of the infant in Lacan’s Mirror Stage, which he describes as “the transformation that takes place in the subject when he assumes an image”. Lionel Bailly elaborates on Lacan’s point and states that infant’s discovery of self “involves the translation of an image into an idea – the idea of ‘me’ or ‘self.’” In the case of the immigrant/ exile, this “idea” is the belonging to a homeland, people and heritage. “While identifying itself in the mirror,” Bailly explains, “the child also identifies with something from which it is separated. […] The founding act of identity is therefore not just emotional and intellectual, it is also schismatic, separating the Subject from itself into an object.” The separated “Subject” and “object” in the infant are what Said and Burgin identify as the “past” and “present” and “old” and “new” in the immigrant/ exile. This separation is not only a result of the internal recognition, but also an external acceptance.

While acquiring a new citizenship status might dissolve the external geographical borders for the immigrant, it simultaneously accentuates the internal geopolitical ones. Gerald Raunig in his essay “After 9/11: Postscript on an immeasurable Border Space” emphasises that the state border does not disappear but rather “becomes diffused in space, multiplies, and sometimes it emerges again in an old grab”. He uses the example of activists registered in the EU internal affairs databases who are not allowed to leave a country that no longer has a border with the country of their destination according to the Schengen Agreement. Similarly, an immigrant realises at an early stage that these borders that have allegedly “disappeared,” pop up again when he/she wishes to travel. This is where an immigrant realises that democracy has its own borders too.

Said, an exile himself, describes exiles as “eccentrics who feel their difference (even as they frequently exploit it) as a kind of orphanhood” and that the exile “insists on his or her right to refuse to belong.” According to him, exiles share “willfulness, exaggeration, overstatement” as characteristic styles and sees these styles as methods for compelling the world to accept their vision. These characteristic styles are products of the Lacanian Subject which is “the active mind that produces the concept of itself as the other in the mirror” while the ego is “the product of the Subject’s imaginary game,” which “helps protect the individual against the threat of incoherence and impotence and provides a fictitious coherence.” Therefore, it is necessary for immigrants/ exiles to maintain this otherness in order to identify with themselves, “that’s me, over there.” Just as the child in the Mirror Stage becomes itself when it is separated from the image of its mother.