Presented at MENA::Norden (working title) workshop in Edinburgh on 27 August 2015. 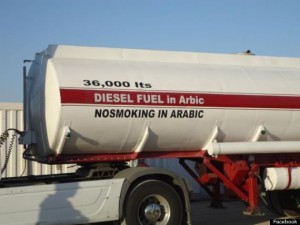 Many of the ‘exchange’ projects I came across function more as a television broadcast rather than a telephone conversation. Meeting Svetlana and hearing her talk about the project priorities gave me hope and brought me here in front of you.

It is unfortunate that none of our occupiers and colonisers in the past six centuries cared about our history. They have either burnt what we have inherited, or worked systematically on cloning their culture onto ours. This makes the act of dis/un-covering our history a mission much more challenging than mining for the oil underneath our soil.

Also the so-called ‘nationalists’ governments that herded us from the 20th to the 21st century and fed us with their propaganda have made us not trust our own language and sent us seeking truth and knowledge in the colonisers’ languages. Furthermore, we sought democracy in their capitalism, freedom in their immigration system, and the study of our own history in their educational institutes. Those of us who learned the colonisers’ languages, have also learned their methods of claiming as ours what does not belong to us.

Our experience is not unique, neither in space (geographically) nor in time (historically). Those who are struggling alongside us but on a different continent or land (I’m thinking North Africa), are too busy putting out their own fires to be able to lend a hand or give us advice. As for those who have gone – in their own history – through what our contemporaries are going through (I am thinking South America) know very well that it is essential that we resolve our conflicts by ourselves and that, despite what the Eurocentric and the sympathetic Westerners believe, there can exist a solution outside of the two major powers in the world – not only that Europe and America’s old garments do not fit us, they make our arse look big.

My schoolfriend’s mother, who’s from East Germany, once said, “while Arabs sat underneath palm trees reciting poetry about the moon, Americans and Russians built a rocket and went there”. It’s true that Armstrong is the first man to take that first small step on the moon, but if it wasn’t for our poetry, mankind wouldn’t have dreamt of taking that giant leap.

Our belief in our language is much deeper than that in our God: Allah. I don’t think Islam would’ve spread as far and as wide if it wasn’t for the language. People fall in love with its words first and, consequently, believe in them. Language is the key to our hearts and hence to our imagination. It is due to this imagination that we wake up every morning, roll our sleeves and carry on living on the hope that one evening we will hear a knock on the door, and see the moon standing right outside our door with a suitcase in each hand and a bright smile.

For a better dialogue to take place, next time any of you visit an Arab country in North Africa or the Middle East I suggest, along with the light garment and sunscreen, you also pack an Arabic phrasebook.