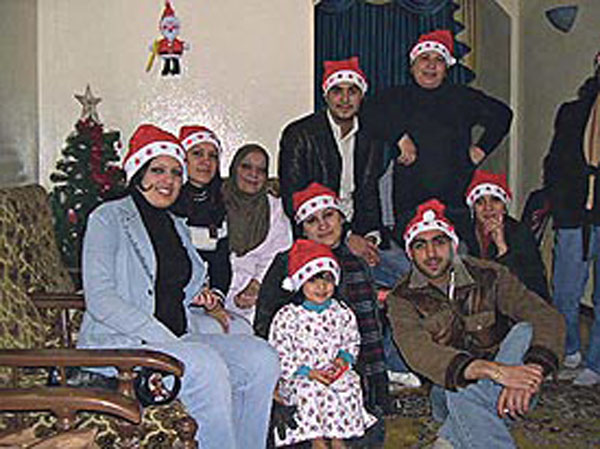 What if we remove one or more of these elements from the tile and (re-)read the image? Let’s say “Family celebrating Christmas at their home in Baghdad, 2005-2009”. I can naturally assume they are one of the few Christian minorities in Baghdad. I might still wonder where did they buy the red Christmas hats, tree and Santa figure on the wall from. They might have got them from a relative or friend who lives abroad. I will still imagine the horror of the family to celebrate a Christian festival in a Western way amidst the height of the sectarian violence in Baghdad. The Christmas tree lights seems switched off, possibly so that not to draw attention to their celebration for passers by in the streets, but also possibly because of a power cut. The curtains are drawn which makes me think it was the former assumption rather than the latter.

Now let’s return to the title and juggle with it again so now it reads “A Muslim family celebrating Christmas at their home, Baghdad, Iraq”. Without the date, and with a moderate knowledge of the recent history of Iraq, I can guess that this could either be taken in the 1990s (interior decoration hasn’t changed much since then, mainly because most Iraqi families cannot afford to modernise their furniture). I can also be a little more controversial and suggest that the photograph might have been taken soon after the 2003 invasion. The latter will sound a little more plausible especially since the clothes people wearing suggest more recent fashion than that of the 90s. Also, this might explain the hats, tree and Santa figure as presents from the US Army who might have brought them with them for Iraqi families along with liberty and freedom.

One last version of the title to ponder is “A Muslim family celebrating Christmas at their home, 2005 – 2007”. This will only leave us running with our stereotype imagination guessing where these faces might be from; Mediterranean, south of Spain? A North African family in Europe? A Middle Eastern family in the UK or even, God forbid, it could be in the land of freedom itself, the United States of America!

Beyond the what-ifs, the title is there, and it has already perpetrated my reading of the image. I cannot assume anymore that I don’t know where this photograph was taken, or when, or of what religion these people are.

There are solid facts to be seen in the image, “information” to be read from the title and assumptions to be made from our pre-existing knowledge. The facts are that it is a Christmas celebration: red and white hats with red stars, a Christmas tree and a Santa figure on the wall (although one can argue that these are assumptions based on our pre-existing knowledge of Christmas symbols, but I will ignore this and take these symbols as 21st century facts.) The photograph is taken inside a house, someone’s home. The photographed people are of three generations; grandmother, children and a grandchild.

The “information” given to us is that they are a family, they are in their home celebrating Christmas in Baghdad circa. 2005 – 2007 and that they are Muslim.

The facts and the given information do not constitute a reading of the image, they are the alphabet of the photograph. The reading starts when I start constructing my assumptions in the build up to the before, the then-now, and the after of the photograph. It is these assumptions that make one might want to read a thousand words in addition to looking at a photograph.

The words Muslim and Christmas are the two dominant words in the title, least because they are capitalised but also because they are contradictory. A cynic might suggest that the hats, Christmas tree and Santa figure on the wall might have been photoshoped into the image, but cynicism aside, I will accept this photograph as genuine with its pixelated resolution and amateur snappy quality.

Everyone is looking straight into the lens – no blinking, no distraction, no looking away nor anyone of the family is in the middle of a sentence (as it is the case with family photographs). All hands are in place too; no hand is in mid-action. Everyone is smiling, some more than others, but a genuine overwhelming happiness dominates the photograph. It could either be the spirit of Christmas, the sense of a family gathered together, or just an act put in front of the camera for the mere 1/250th second of the exposure. I will take the liberty to overrule the latter option only because I do believe that their smiles seems non-faked and because of the occasional naïve optimisms that I feel over Christmas, which is the time I am writing this with a bright lit Christmas tree right by my side.

Although their Christmas tree is at the far back of the photograph and partially obscured by the woman on my left (the only one showing teeth in her smile), but unlike the figure on my right with his/her back to the camera, the tree makes a dominant appearance in the photograph, maybe because of the silver star and red tinsels or because of its symbolic presence, or possibly because the Santa figure on the wall is pointing at it with his cane. Either way, the tree cannot be ignored and has become another figure to examine when scanning the faces of the people posing for the lens.

I see a family, and I can only wish them a long and happy life together. They might have lost relatives and loved ones to death or immigration, but those remaining, posing smilingly to the lens, may possibly grow older together. A mother is leaning with her elbow on her son’s shoulder. The same shoulder which might have carried his father, her husband, in a coffin to the grave (the black dress of the woman most likely indicate recent death of a loved one). The two sisters on my right have their arms entangled together, the way how an older sister would guide her younger sister through life, generously sharing with her experiences and mistakes so that not to repeat them. A woman in the centre, in front of her mother and with her daughter on her lap. A thread of DNA resemblance is running through their eyes, mouths and noses connects them, genetically, emotionally and fatefully together. The woman is sandwiched between what she might become (her mother) and what she might have been (her daughter). Then there is another young man – one of only two out of nine people in the photograph. He is the only one of the family who seems partially in-motion, or unsettled. It might be that he was the one who set up the self-timer on the camera and pressed the shutter and hurried back to sit with the rest of his family. He is also the only one with his white fluffy ball in front of the hat.

The lack of gestures or mouth movements by any of the family members makes my assumption leans towards it being a self-timed photograph. Everyone’s gaze is directed at the exact same point and no one is looking slightly above or below the camera (being a digital image, the camera’s position does not necessary have to be at eye-level with the photographer’s).

Most people often like to look back at older family photographs and see smiling faces. It is often comforting to recall that once upon a time, we were happy, that we were together and that some of us, who are no longer with us, have, once upon a time, been with us. This is a family portrait, and like most family portraits, the purpose of the photograph is to entertain and remind the people in the photograph of a happy past, rather than for an audience of strangers. It makes me feel pervasive looking at the photograph despite their welcoming smiles and embracing silence. But like most Iraqi homes, strangers are often welcome, whether there is room for them or not, and if there isn’t enough food to feed everyone, then it is often the host who sacrifices his/her share of the food to make sure that the guests don’t leave the house hungry.