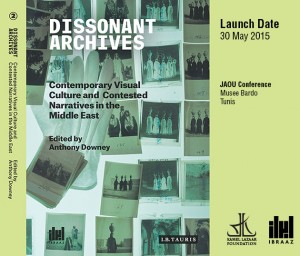 Featuring writing, interviews and original art work – reproduced in full-colour – by internationally renowned academics, curators, activists, filmmakers and artists, Dissonant Archives: Contemporary Visual Culture and Contested Narratives in the Middle East asks a crucial series of questions: How do we define the ongoing relationship between contemporary art and the archive? How do we understand the suppositional forms of knowledge that are being produced in contemporary art practices in North Africa and the Middle East? Do these practices foster a nostalgic fetishisation for the archive or suggest an ongoing crisis in institutional and state-ordained archiving? And what, moreover, do artistic practices that engage with archives reveal about the politics of global cultural production?

Emerging throughout this volume as a troubled, dissonant and performative space, the archive is central to a process whereby contemporary artists produce their own critical and highly speculative visions of the future. In exploring and producing archives, be they alternative, interrogative, or fictional, these artists are not simply questioning the authenticity, authority or authorship of the archive; rather, they are unlocking its regenerative, radical potential.