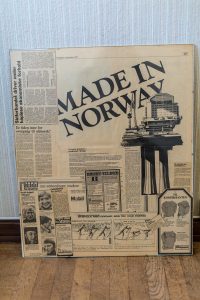 I am pleased to be invited again by the Faculty of Fine Arts at the University of Agder to lead a workshop with MA Fine Art students on approaches to photography and filmmaking as documentary narrative and semi-fictional storytelling.

After the two-day workshop, I will be supervising the students to create work in response to Platform Nord festival and its theme to create a fictitious Transnordanic State seeking independence!

Platform Nord – A festival for young Nordic contemporary art – is a festival and meeting place for Nordic young artists age 18 to 30 from all artistic expressions: performing and visual arts including performance, theatre, dance, music, literature, film, installations, photography and more.

The festival takes place in Kristiansand NO between 11th and 14th October 2017 and presents nine projects to the public. This year, all participants take part in a cross artistic workshop – Transnordania – that concludes the festival with an intervention in Kristiansand city centre.

Participant in Platform Nord 2017, will be the founder of Transnordania, a three-day nation-building process under the guidance of director and artist Morten Traavik.

Transnordania is a temporary break out republic on Platform North’s physical and temporal territory. The project is gaining inspiration from, among other things, the ever-increasing currents of nationalism and local patriotism, Brexit, the fragmentation of the EU and the increasing self-awareness of quasi-states and regions such as Kosovo, Catalunya, Scotland, South Ossetia, Åland, Sàpmi and the Barents region.

Based on the participants’ own artistic practices and working methods, the state of Transnordania and all its attributes and unifying structures such as similar languages, ideology, governance, currency, passport, citizenship, national day, national anthem, etc. will be determined and formed by the founders themselves through the three days leading up to the formal establishment of the territory. Participants put their own artistic practice into work, and through group work the background history, potential and form of Transnordania are shaped.